When Shannon Bishop Arvin was announced last summer as the incoming president and CEO at Keeneland, replacing the retiring Bill Thomason at the storied racetrack, it felt like more than the usual changing of the guard. Arvin is the first woman to hold the position and, at 46, one of the youngest.

That means that Arvin is in some ways the least traditional leader of Keeneland’s history and potentially the most open to new approaches — a flexibility that has already come in handy during the coronavirus pandemic. As president-elect last fall, she supported Keeneland’s decision to offer online bidding for the first time at its September horse sales in response to travel restrictions and other safety precautions associated with Covid-19.

“There were some people who said, ’You can’t let people bid on the Internet. We can only have an auction when everybody’s physically there, to create the magic and the hustle and bustle of an auction,’” Arvin said in a recent interview. “But the world has changed, and we have to be prepared to enter that new world and try new technology, and work to create our hustle and bustle in different and unique ways.”

Online bidding turned out to be a hit with buyers, who participated remotely from Europe, Asia and around the globe.

Keeneland is “very traditional,” Arvin says, “and I have said to our team, let’s take the best of our traditions and make them even better. Keep what’s worth keeping, because there’s so much worth keeping, but don’t be afraid to try something new. And for goodness sake, don’t do things just because that’s the way we’ve always done them. Let’s think outside the box.”

To that end, Arvin says she hopes to incorporate new technologies such as cutting-edge scanning machines that can more accurately assess a horse’s physical fitness for a particular race before it is run. “If that means we’re in a position where we’re forced to scratch a horse at the last minute because we’re not comfortable that it’s in the best interest of the horse to race, then we’ll make that hard decision.”

But for all her willingness to think outside the box, Arvin is no outsider at Keeneland. Indeed, it would be hard to find anyone with more impressive Keeneland bloodlines. When the track opened in 1936, her grandfather, W.T. “Bish” Bishop, was its first general manager, and her father, the late William T. “Buddy” Bishop III, grew up living in an apartment on the grounds — just above Arvin’s current office, where she keeps photographs of them on a shelf. Her father served Keeneland in various capacities, including director, trustee and counsel, until his death in 2008.

“The world has changed, and we have to be prepared to enter that new world and try new technology.”

Arvin’s own earliest memories of Keeneland are from her high school years, when she worked during the summers answering phones, filing catalogs and looking up pedigrees in the sales office. Later, as a partner at the Lexington law firm of Stoll Keenon Ogden — where she represented thoroughbred owners and racing organizations including Breeders’ Cup Ltd. — she became Keeneland’s corporate counsel, and went on to become secretary and an advisory member of its board of directors in 2015.

The Keeneland Trustees’ vote to name her as their new top executive was unanimous. “Shannon’s leadership, professionalism, the respect she has earned within the horse industry, her intimate knowledge of Keeneland’s core businesses and her vision for Keeneland’s future made her the clear choice to become the next president,” trustee Seth Hancock said in a statement.

Like every leader of Keeneland, Arvin loves horses. She grew up riding them, and she and her husband, Will Arvin, live on Foxtail Farm in Nicholasville, where they own horses and lease the land to a thoroughbred owner. Her 9-year-old daughter, McCutcheon, shares her passion. “She’s happiest when she’s on the back of a horse or in the barn,” she says. “That’s her happy place.”

It’s with that love of horses, in part, that Arvin hopes to nurture new racing fans. “We need to share the sport with more people, including younger generations, and I think that’s going to be done by making that connection to the horse,” she says. “In today’s society, there aren’t a lot of opportunities to interact with horses, so the more we can open the doors for more ways to let people experience the horse, the more we’ll be making our sport more appealing.” 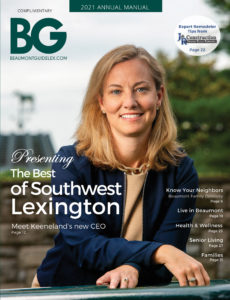 Her own happy place is at the track at Keeneland. “I hope that there will never be anyone sitting in this chair that doesn’t feel completely moved by the majesty of a horse,” she says. “There’s a saying that there’s something about the outside of a horse that’s good for the inside of a man, and that’s so true. We’re so lucky to be able to be in downtown Lexington, which is so vibrant, fantastic restaurants and so on, but then you can drive 10 minutes and you’re in the peaceful countryside and you can see horses running. And there’s not a more peaceful place to me than right by the track early in the morning, watching the horses train.”

This article appears on page 12 & 13 of the 2021 annual print edition of Beaumont Guide.