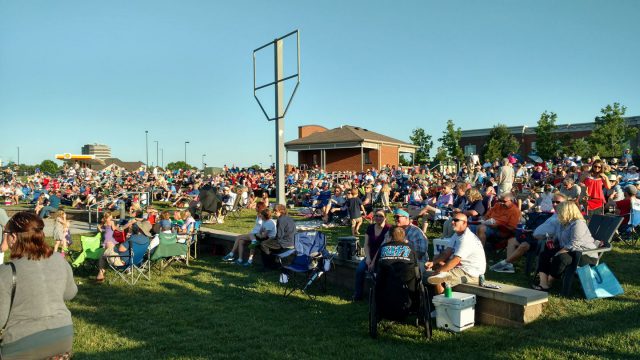 With the help of dozens of internet supporters, the music may play on at the Southland Jamboree.

The summer-long series bring bluegrass music to the public in a fun-filled and free atmosphere.

The jamboree, which began in 2006 as community outreach from several Southland Drive merchants, enjoyed a home behind the Collins Bowling Center for a decade until construction of a new office building forced the event to be moved.

“The city graciously offered to let us use Moondance,” Tibbitts said.

Although it still bears the name Southland Jamboree, the event was moved to the Moondance Amphitheater in Beaumont.

But there was a downside to the new location. The financial support from the Southland merchants dwindled over the years and it was announced that the 2018 season would have to be canceled due to the lack of a large sponsor.

“When we moved, the merchant support began to dry up,” Tibbitts said. “We haven’t been able to reach out to the merchants in Beaumont as much as we would like.”

Tibbitts said each evening costs about $500 to stage after the band is paid and production costs are covered.

Once word began to spread that the season would be called off, Tibbitts said there was a groundswell of support.

“People started offering donations, volunteering, anything they could do to make sure this continues,” Tibbitts said. “It’s one of the few regular venues for bluegrass music and lots of people are eager to help out because of their love of the music.”

Some of the musicians even offered to play for free to help cut costs.

“That’s a great offer and it says a lot about the kind of people who love and support the jamboree,” Tibbitts said. “We hope it doesn’t come to that but it was a great offer.”

To help organize the donations, Lex Arts was brought in and agreed to be the agent for a Go Fund Me page.

In the first 16 days of the Go Fund Me drive, the jamboree has raised over $6,500 which has allowed the organizers to move forward with a slate of bands to perform in July,

Tibbitts has announced the bands scheduled to perform:

Contributions to the Go Fund Me drive can be made at www.gofundme.com/c5f72-save-the-southland-jamboree

Tibbitts said she hopes the funding problems will turn into an opportunity to secure a more stable financial future for the jamboree and the organizers will be reaching out to more merchants in the near future.

“The jamboree is always a lot of fun. It’s very family and dog-friendly,” Tibbetts said. “It’s a fun place that people can bring their kids and everyone will have fun.”

Tibbitts said there is usually a food truck at the jamboree and West Sixth Brewery is always on hand.

“People like to make an evening of it,” Tibbitts said. “There is usually a jam session after the band plays and we encourage anyone to can play to come by and sit in. As a musician, I know how fun that can be and everyone has a lot of fun.”

To make a donation to the group’s Go Fund Me account, go to www.gofundme.com/c5f72-save-the-southland-jamboree